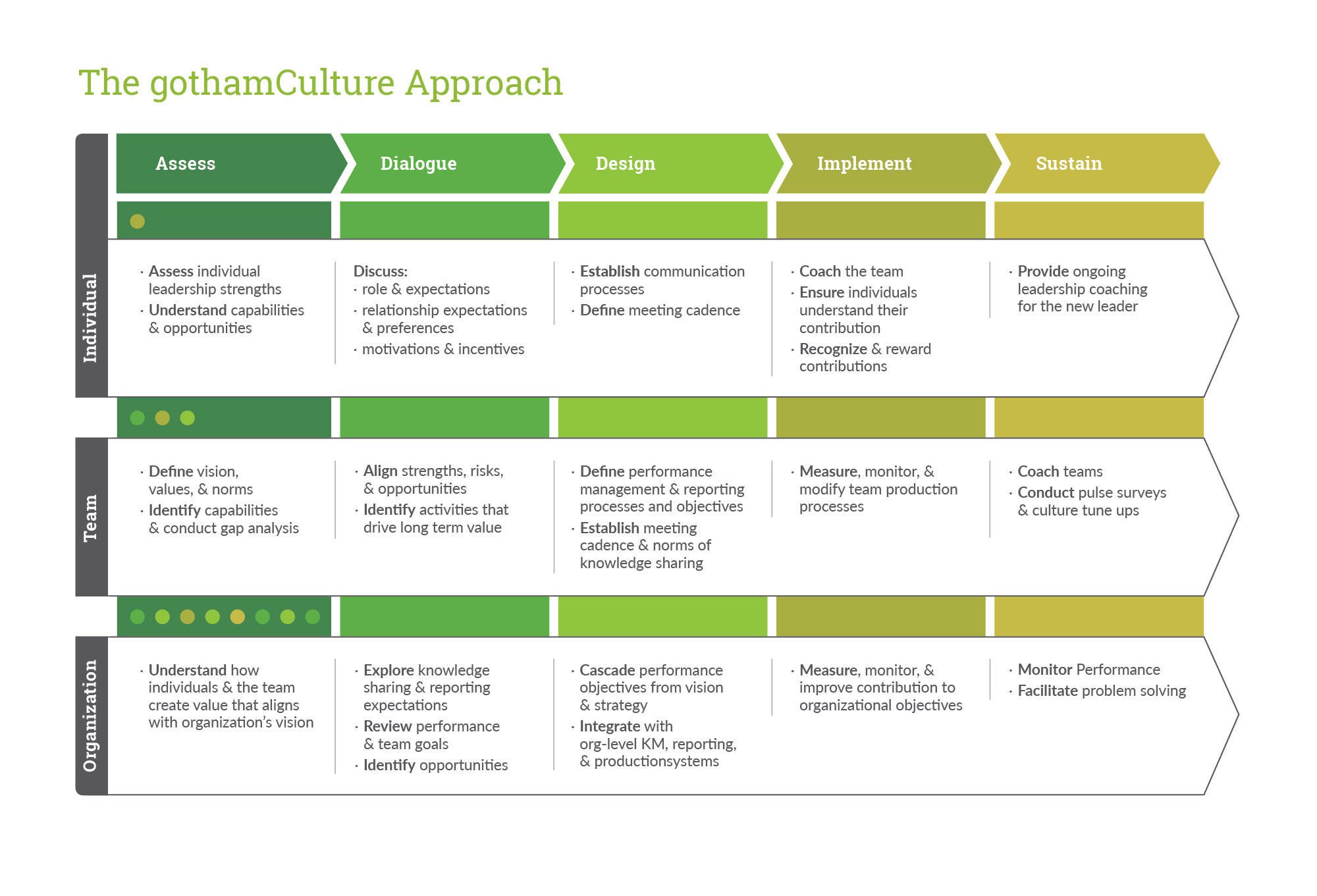 Most traditional new leader assimilation processes trace their roots to original research conducted by John Gabarro first published in 1985 (Gabarro, 2007). Gabarro studied the succession of 14 general managers to understand the challenges in the process of taking charge of a new organization. Using longitudinal studies and historical case reviews, Gabarro examined successions covering a range of both functional and general managers in organizations ranging in annual sales from $1.2 million to $3 billion, included both turnarounds and normal situations, and successions that failed as well as those that succeeded.

Across all of the leadership successions in the study, Gabarro discovered three key findings:

The five stages of taking charge identified by Gabarro are:

As revealed in the experiences of the new leaders Gabarro studied, it typically takes 13 to 18 months of learning and experience before a new leader is ready to make significant changes and significantly impact the organization. Given the amount of time and resources invested in finding and placing a new leader, waiting a year or more to see a return on that investment is a daunting proposition for most organizations. As such it is no surprise that Gabarro’s work spawned tremendous interest in finding ways to significantly reduce the time it takes for new leaders to progress through the first two stages of the process. The resulting new manager assimilation process that is common practice today was first developed as a program by the U.S. Army and has been used in numerous organizations including Citigroup, Exxon, GE, Ford Motor Company and others (Nielson Group, n.d.).

Manderscheid (2008) describes the typical process used to accelerate new leaders’ assimilation as a five-step process that gathers insights from the new leaders and teams and then facilitates open dialog to build a shared understanding of key personal and organizational factors for the new team.

The goal of the structured process is to accelerate the development of team operating norms, to clarify expectations, and to build relationships that will enable the leader and team to achieve full performance in an expedited timeline. Little research has been conducted on the effectiveness of this typical approach to new leader assimilation, though a Google search reveals dozens of organizations that offer the service and many more who use some form of the assimilation process for new leaders.

But, despite this proliferation of intentional assimilation programs, research by Carruci (2017) found that between 50% and 60% of executives fail within their first 18 months in a new role.      While the reasons for failure are varied, research by the Center for Creative Leadership (as cited in Jacoby, n.d.) identifies three common reasons that result in failure for newly transitioned leaders:

And while the typical assimilation process can be an effective way to start addressing these three items, the one-time nature of the intervention means that the work done is, at best, laying the foundation for continued work between the new leader and her new team.  That’s why at gothamCulture, our unique approach to new leader assimilation spans beyond these first facilitated interactions to include a set of wrap-around services that help accelerate team formation and shorten the timeline to full performance for any new leader.

The gothamCulture approach to New Leader Assimilation applies our Assess, Dialogue, Design, Implement, and Sustain engagement methodology and focuses on understanding the expectations and environment of the new team at 3 levels: individual, team, and organization.  The activities and engagements across all phases and levels create a customized assimilation road map for new leaders that charts the course to full performance.

Our team of organization development and leadership experts partner with new leaders to tailor their assimilation plan and provide coaching and facilitation support needed to achieve results and accelerate impact.

Jacoby, J. (n.d.). Why newly appointed leaders fail and how to avoid it. Retrieved from: https://www.leadersbeacon.com/why-newly-appointed-leaders-fail-and-how-to-avoid-it/