Silicon Valley is known for its buzzwords around corporate culture, having adopted (or been labeled with) such terms as “bro culture”, “work hard/play hard culture” and “culture of failure.” Startups that operate at breakneck speed, encouraging all-night hackathons and weekend work retreats, are often held up as shining examples for aspiring young entrepreneurs to follow on the road to success. But the reality is not quite so appealing for those who don’t fit into the strict tech mold, and who don’t buy into the assumption that the only way to succeed is to sell your soul.

Many startups unknowingly reinforce these types of behaviors as they work to keep up with the Joneses (or keep up with the Facebooks in this case). In Silicon Valley’s war for talent, benefits and perks in tech companies have reached a fever pitch, all in the spirit of encouraging employees to stay as close to the company campus for longer.

The “golden handcuffs” that tech companies use to lock down their talent—the beer in the break room, catered lunches and office yoga classes—are beginning to come under fire as tactics for these companies to attempt to squeeze extra hours (and hopefully, productivity) out of some of their most valuable resources; their people.

This is not the case for everyone, however. There are those in the industry who have been intentional about growing their companies in ways that seem to go against the crowd. One such company is npm, a venture-backed startup based in Oakland, CA with over 2.7 million developer users and several major enterprise customers including Wal-Mart, Blizzard, Docusign and Autodesk. The company eliminated catered lunches at the office in favor of company-sponsored outside lunches. Employees are encouraged to prioritize family, and discouraged from working extreme hours or weekends.

I recently had an opportunity to chat with npm’s CEO, Isaac Schlueter to learn about his personal challenges with the tech stereotypes and what he is doing to grow a successful tech startup by bucking the system. Here’s what he had to say:

CC- Tell readers a little bit about npm, what you do, and how you got started.

IS- Before npm, I worked for a handful of well-known software companies like Yahoo and saw a bunch of different approaches to managing a company’s culture over the years.

When I started npm in 2014, I wanted to make sure that we were very intentional about who we were and the way in which we would operate. Many of these values stemmed from my own personal values and, surprising to many, some of these ways of working are in direct misalignment with some of the typical tech startup stereotypes and assumptions about how to succeed.

CC- In your words, what are Silicon Valley’s “Golden Handcuffs”?

IS- Some see the typical benefits associated with tech companies as key in attracting and retaining talent. Others see them as ways to keep driving people toward productivity.

The term golden handcuffs bugs me because it holds several meanings. In one sense, it is defined purely in terms of financial compensation. At npm, we have a bonus-vesting program but we don’t want to provide that along with an expectation that people need to stay in the office for an unhealthy amount of time. 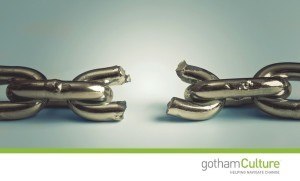 I once worked for a company (now out of business) that had catered lunches. But I rarely took part, as I prefer to get up and go outside to get lunch. It gives me a chance to take a mental break. It was against the norms of that culture, and people would often ask me if was okay (thinking that something obvious must be wrong with me to make me leave the office to take a break) whenever I left the office to get lunch. There, people would pile food on their plate and sit down to keep working. Catered lunches were supposed to help with productivity, but without taking a pause, these people tended to make worse decisions in the end.

This is a really hazardous situation with startups. There are always urgent things to deal with and you have to be able to make smart decisions about what urgent things you will prioritize and what you’ll have to live with letting slip by. The ability to think strategically is a matter of life and death and driving continuous, long hours increases the risk of making poor decisions, in my opinion.

CC- How, specifically, do you want the culture at npm to be different? And how are you and your team supporting these goals?

IS- One thing that we did to manage the pressure to work more was to establish an explicit no working on weekends or after-hours policy.

This is a clear set of guidelines about when people are expected to be working and not. Leaders have to live it and set the example for others to make it real for people. And when people do work late or over the weekend despite the policy, we give them feedback, acknowledge their efforts to go above and beyond and encourage them to take a day off the next week. How we as leaders react to behavior reinforces certain things in our company and we have to be ever mindful of that.

Second, our values play out in the day-to-day, which helps shape the culture. For example, we try not to talk over each other in meetings. We keep meetings small, and use a talking stick to help keep conversations inclusive. If more than five people are in attendance, we appoint a moderator to make sure everyone is heard.

This process of slowing down and getting all of the data helps with our decision-making quality and promotes a more grownup approach. It may take longer to make a decision up front, but I don’t want to work in a place where the person who beats their chest loudest is the only one who’s heard. It’s not good for quality decision-making.

Third, unlike many tech cultures, at npm we focus on processes and not people. What I mean by that is there’s not a lot of hero worship going on. We value our people but we focus our attention on refining our processes to help everyone shine, rather than rewarding individual efforts.

A final difference is that we don’t foster a culture where people need to drink with the boss in order to get ahead. I’m sure there are a few beers in the fridge in the break room but alcohol is not a centerpiece of our culture. We realize that there are highly experienced, professional tech workers out there who have families and active social lives outside of work and that many of these people are not interested in working in organizations where those types of behaviors are required to succeed.

We’ve been very intentional about saying that we are different in this way and, while it may prevent certain people from applying to work with us, we attract and retain those people who want what we have to offer.

CC- Why is it important to put your employees work-life balance at the forefront of your employee’s benefits?

IS- In almost any modern company, things have become so cheap that the biggest investment is usually in the people. As business owners, we often feel like we have to get the most out of them as possible. The fatal assumption most people make, however, is that working people harder and harder will yield better results. Unfortunately, more is not necessarily better. It’s counterintuitive, but in order to get the best out of your people you may want to stop driving so hard.

There are a huge variety of problems that stem from pushing these high intensity cultures. People make worse decisions, it drives a pressure to engage in less ethical behavior, etc. You’re now paying a premium for people who are giving you less than 100% in return.

CC- How has your culture at npm impacted your company’s performance?

When starting npm, I had an opportunity to be very methodical and deliberate about the culture and what we stand for. We looked at what we were and where we wanted to go, and realized that we didn’t need to rapidly spew out prototypes.

I stepped back and asked, “what kind of company do I want to work at?” I had observed in previous companies I’d worked at that better ideas were coming out of more introverted environments. Open bars and free lunches didn’t ever make me feel as good as doing great work and living a better and more fulfilling personal life outside of work.

But, the surprising thing is npm has moved faster than any other software team I’ve been a part of. It seems counterintuitive, but by having a strong foundation and clear expectations about how we will get our work done, it actually saves a ton of time in the end.

Hiring is easier here than any other job. npm has great brand recognition among developers. We have lives outside of work. There is a small, noisy minority who hates the idea, but the overwhelming majority of people in the industry are seeing the value and are very attracted to our culture. We see a high caliber of very diverse applicants applying all the time as a result. That breadth and depth of experience would be unattainable without actively supporting the work-life values that we have in our culture.

While there is certainly no shortage of deeply rooted beliefs and assumptions about how tech startups rise to glory, there also exists a subset of tech CEOs who are bucking the trends and stereotypes, intent on proving that there are still better ways to do things that yield the same or better results in terms of performance.  Time will tell as these new practices impact behavior and long-term results, but one thing is for sure: there is no silver bullet recipe that works in all situations.  My conversation with Isaac reinforced for me the critical importance of being intentional about what you stand for and how you align your ways of working with what’s most important to you as a leader.

This article originally appeared on Forbes

Your Guide to Growing Startup Culture 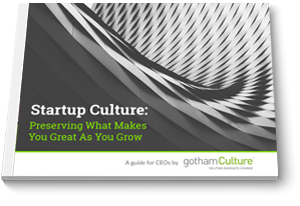 How do you build and grow a startup culture your employees love?

Sign up to our newsletter and receive your free guide to successful startup culture.