How Ascentra Credit Union Took Control of Its Culture

As they gathered for their 70th annual meeting in 2018, employees of Ascentra Credit Union (Ascentra) celebrated another milestone of longevity. One of their board members had faithfully served the organization for 50 years. In honor of his service, the Ascentra Credit Union Foundation named their Clinton Community College Emergency Grant in honor of him and his service.1 Recipients of the grant will receive encouragement to take on similar community service opportunities as they move forward with their careers. This dedicated board member serves as a shining example of the level of commitment that Ascentra’s employees have. Unfortunately, intense commitment does not necessarily translate into a healthy or productive corporate culture. Leaders must make time to understand the current state of their organizational cultures in order to ensure that they are eliciting behaviors needed to execute on business strategy.

One of the major factors in Ascentra’s efforts to manage its culture was the untimely passing of the previous CEO, Paul Lensmeyer. The day of his passing was to be a day celebration surrounding the official ribbon cutting for a new branch. Instead, Ascentra lost a beloved leader. He was the heart of the organization, as a friend, a father figure, and a cooler older brother to many of the staff. This tragic event created the need to install a new CEO far ahead of schedule and in spite of their careful planning. That’s when Dale Owen became CEO.

Another major reason to manage the organization’s culture was a pending move into a new, consolidated corporate office, in addition to the acquisition of another credit union, the onboarding of several new members of the leadership team, and the implementation of new technology across all their systems. It was an excellent opportunity for the organization to engage an external business partner to provide advisory services in support of an effort to understand and shape their organizational culture.

Clearly, with all of these changes taking place at the same time, Ascentra was in a situation of culture by default (one formed without intention) rather than culture by design (one intentionally aligned to the execution of the strategic goals of the organization). “More than anything else, we wanted to focus on making sure the culture stays the way it has always has been as we grow,” shares Dale. To accomplish this, Dale and Ascentra had to devote the same attention and engagement as they do to managing corporate initiatives and its finances.

Seizing the opportunity to actively engage stakeholders to develop a unified vision and culture that support the business strategy, Ascentra leveraged gothamCulture’s process to align the organization for sustained growth into its next chapter. The need was clear: take a fresh look at the culture of the organization and protect the positive aspects while learning how to evolve the culture as the organization continued to grow.

“More than anything else, we wanted to focus on making sure the culture stays the way it has always has been as we grow.” – Dale Owen, CEO

The engagement methodology that gothamCulture used is referred to as ADDIS: Assess, Dialogue, Design, Implement, Sustain. It is a thoughtful method that seeks first to define the issues and opportunities that exist in the client organization. Based on their assessment, gothamCulture partners with senior leaders to design a measurable and accountable intervention plan that enables stakeholders to drive performance and support strategic execution. 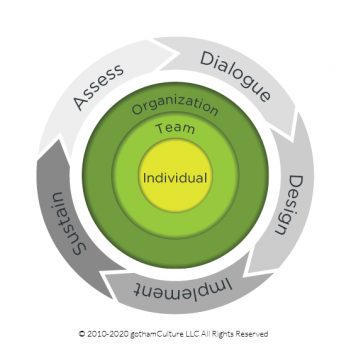 ADDIS is an iterative process that follows a logical path:

Through the proven success of gothamCulture’s change methodology, our consultants support clients in organizational culture change by evaluating readiness for the change, identifying and closing skill and knowledge gaps through training, and developing strategic communication plans to ensure a successful implementation.

Critical Success Factor #3: It All Starts at the Top

After an initial assessment, gothamCulture recommended approaching Ascentra’s culture evolution effort at the executive team level. Ascentra’s executive team is made up of six people, including the CEO. Most of them have worked together for decades. During early scoping calls, it became clear that their executive team was struggling with addressing long-running circumstances related to the quality of the relationships among the executive team members. The CEO either observed or was told about several interactions which caused him to begin asking important questions such as:

In an organization undergoing rapid growth and change, it’s not uncommon for the executive team to start experiencing more conflict than they did previously. The pace of the growth was so fast that uncomfortable, yet important, conversations were never fully dealt with. And, with so much to celebrate, the desire to address the more complicated issues waned.

As a part of his coaching, Dale participated in a 360 ̊ leadership development assessment. He received feedback from all of his direct reports, several members of his peer network, and two members of his Board providing feedback as his “supervisor.” As a result of the process, Dale was able to identify his individual developmental goals to work on throughout the engagement. “This process was extremely valuable,” says Dale. “I was able to get an outside perspective on some things that we were dealing with. gothamCulture’s breadth of experience helped me look at things a little differently.”

Towards the end of Dale’s coaching engagement, gothamCulture initiated work with the entire executive team. Over the course of six half-day sessions, gothamCulture had a chance to examine the team dynamics, and to engage the team to work together to improve them.

gothamCulture worked to help individual members of the team understand each other, through the use of an assessment (the Myers-Briggs Type Indicator), and through facilitated group and individual sharing and reflections. The goal was to develop team norms, a set of behaviors that they wanted to require of each other. As the team grew in trust with one another, the team was taught a philosophy for giving and receiving feedback. Radical Candor™ is conducted in a safe environment where each person has the opportunity to give other team members feedback on how they’ve been experiencing each other.2

Admissions of hurt feelings and misunderstandings about why certain business decisions were made emerged. During the process, each person had a chance to air their grievances as well as respond to comments about how they were being perceived and what their true intention was.

Everyone was encouraged to be present, to be transparent, to respect each other, and to work to understand that everyone can have an opinion that should be listened to. Among other positive group dynamics themes, they agreed to never leave a disagreement unspoken, to avoid negative energy and body language, and to stop interrupting who is speaking. In time, following the process gothamCulture designed, the team aligned around norms and a feedback process was built into their weekly meeting agenda.

At this point, gothamCulture reflected with the executive team and agreed that the team had worked hard to align and that timing was right to open the process to the rest of the organization.

“This process was extremely valuable. I was able to get an outside perspective on some things that we were dealing with. gothamCulture’s breadth of experience helped me look at things a little differently.” – Dale Owen, CEO

With the executive team working toward continual alignment, gothamCulture launched the organization-wide culture effort. What followed was a series of interviews and focus groups with staff representing several branches and representation from all functions. The goal was to hear stories about the history of the organization, learn what has made them who they are today, and discover what they want the culture of Ascentra to be in the future.

One of the interesting things that surfaced was that many employees started out as tellers and grew their careers over decades as Ascentra grew. At the same time, the organization is continuing to grow by adding more people and bringing more experience to each branch. With this growth, there is a need to remain adaptable to the members and community while ensuring consistency with the processes and behavioral expectations across teams and business functions.

To be sure, Ascentra had an established culture. It was one that was values-driven and community-focused. But, as one person put it: “We need to shift our mindset. We are learning and accepting that what got us here, what we’ve always done, isn’t the only way to get us there.”

In the face of so much growth and change, several employees remarked that they did not want the organization to forget where it came from. “Community and members come first,” was a common refrain.

As gothamCulture was able to capture and begin documenting Ascentra’s culture, the staff was able to see how they needed to fully live up to the organization’s tagline, “Listening, Caring, Doing What’s Right.”

To formalize this effort, gothamCulture recommended the creation of a culture champion group. Ascentra took that recommendation and created the Culture Committee. Members of this committee are influencers in the organization, be they informal leaders, well-networked employees, or the “go-to” people in their offices. In their role, they are asked to be a safe, neutral, and objective contact with whom employees can confidentially discuss their thoughts, suggestions and concerns.

The Culture Committee meets monthly to help define opportunities for cultural improvement and propose to senior management possible ways to pursue those opportunities. Their work is grounded in Ascentra’s core beliefs:

We need to shift our mindset. We are learning and accepting that what got us here, what we’ve always done, isn’t the only way to get us there.” – Ascentra Employee

Culture is continually becoming, evolving, and defining itself, especially in organizations that are experiencing rapid growth or change. If leadership is not taking an active and conscious role in shaping how the culture emerges and is defined, it is certain that the culture will not be aligned with corporate objectives.

Thanks to gothamCulture’s support, Ascentra is well-positioned to keep culture on the agenda in all leadership and staff meetings. This consistent focus on culture will ensure that the organization is in control of the culture as it continues to grow. “We’ve always had a really great culture. I’m routinely asked to talk about our culture with other companies,” says Dale with pride. “Now that we have so many new people in the organization, it’s important that we make sure that we are laying out the right cultural expectations so that, ultimately, our members enjoy the benefit.