The last few months have fundamentally changed the way many people live their lives day-to-day. Over the last few weeks, in particular, I have noticed an increase in a variety of what might normally be considered “unhealthy” behavior during my interactions with people.

All of my interactions forced a small voice in the recesses of my mind rushing to the forefront. An experience that I had many years ago in the military. I had an opportunity to learn quite a bit about military service members who were forced to endure long periods of captivity as prisoners of war, situations that often included intense mental and physical torture.

While any situation like this would be quite traumatic, the stories that really came to mind for me lately have been the stories of Vietnam veterans who found themselves prisoners of war for extended periods of time (some in excess of eight years). Lessons from men like Admiral James Stockdale, the highest-ranking POW in the Hanoi Hilton during the Vietnam war, the late Senator John McCain, and hundreds of others. These servicemen endured months or years of abuse including long periods of solitary confinement and worse.

These former POWs helped us to understand the effects that a total loss of control can have on a person’s psyche and they also helped current service members to understand how to best prepare themselves to survive in such situations should they find themselves in a similar position.

One such veteran, Ralph Galati served as a Lieutenant in the US Air Force as a flight navigator when his F-4 Phantom jet was shot down on February 16th, 1972 over North Vietnam. After he and his pilot safely parachuted into the center of an enemy village, the two were taken prisoner and moved to Hanoi. Enduring a period of captivity of 14 months, including interrogations, sleep, and food deprivation as well as 75 days in solitary confinement, Lieutenant Galati was forced to endure many things that reinforced to him and other prisoners that they had no control over their present circumstances. This treatment was all specifically designed to disorient and to pressure the prisoners into breaking so that the North Vietnamese could gather intelligence or exploit the prisoners for propaganda purposes.

Ralph Galati’s Advice to Others.

Want to learn more about Ralph Galati’s experience and his advice for those struggling during the pandemic? Listen to the full interview on The gothamCulture podcast.

1. We’re all being tested. “I really believe that most people are stronger than they give themselves credit for,” Galati suggests. “We need to learn how to ‘suck up’ the small stuff. Everything is not life-threatening. We have to learn to adapt to these changing circumstances.”

2. Throw out a lifeline of communication. Ralph and his fellow prisoners were forced to take great risks to communicate with one another. After being in solitary confinement for weeks, one of the other prisoners made sure to get a message to Ralph simply to let him know that he was not alone. The prisoners devised a variety of clandestine communication techniques and codes to help them to thrive. When Ralph shared with his fellow captives that they had not been forgotten, it was a “huge shot of adrenaline” for them.

In today’s day and age, we are fortunate to have a wide variety of methods for communicating with one another. Add on top of that that we have the freedom to communicate with each other at any time we wish makes this easy and totally within your control. Take a moment to reach out to someone, if not for your sake, maybe for theirs.

3. You’re not alone. For a long while, Ralph had no idea where he had been taken after his capture. Interrogations, deprivation, and solitary confinement for 75 days created a situation where anyone would feel alone. This was intentional and Ralph had no way to change it. When that first fellow prisoner took the great risk of attempting to make contact with him, it had a tremendous possible impact on him. He was not alone. He was acknowledged and he had a support system even in his dismal situation.

4. Identify your internal and external resources. At the end of the day, some people seem better suited to adapting to a massive shift in their life situation than others. “There were a lot of external forces that helped us get through in addition to the internal forces that we brought to the table,” Galati explains.

Ralph calls upon a variety of internal resources that he had to sustain his through the dark times- his family, his faith, and his duty to country. Once he successfully made contact with other prisoners, he began to realize that he had a wealth of external resources available to him to support him. Many of the other prisoners had been held captive for years prior to Ralph’s capture. They had a wealth of knowledge that Ralph was able to use to resist.

5. Learn from others. Ralph learned coping mechanisms from his formal military survival training, but he also learned from those prisoners who had been enduring as prisoners for years prior to his arrival in the Hanoi prison camp. Those prisoners who had been in captivity for years had developed a variety of methods and tactics for enduring their imprisonment. These lessons were hard-won and helped Ralph to understand how to successfully adapt to and get through the experience.

You don’t have to have all the answers and you certainly don’t need to feel like you need to be dealing with the current pandemic like a rock star. Take time to learn from those around you who have successfully navigated similar situations in their lives.

6. Balance and perspective. When you’ve lost your freedoms and control over your own fate it’s a redirection of your life attitude. For Ralph, a good day was, “just being bored”, as it meant that his captors were leaving him alone. Drawing upon real life and death experiences helps him to put things into perspective. “Although this situation [sheltering in place due to the pandemic] is difficult, it is not life-threatening. You just have to behave a little bit differently.”

This lesson applies to individuals as much as it applies to business owners. Times are extremely difficult for a lot of folks out there. Some business owners may have to close their doors permanently. No matter how earth-shattering any of these situations may be, peoples’ lives are not on the line. The challenges of the current situation are going to require people to change their behaviors, potentially for a long time in order to adapt to thrive in the current situation.

7. Little things can make a big difference. When deprived of all control over one’s own life, it’s the little things that can make a difference. For Ralph, that may have been getting a secret communication from a fellow prisoner simply letting him know that he was not alone. For you, it may be something entirely different. It may be making payroll just one more cycle. It might be giving up your own pay to keep your employees secure. It might be something as small as getting a call from a loved one. When there aren’t a lot of big things to celebrate, it’s the small things that can help you get through the day.

8. Practice your own brand of resilience. Ralph suggests that we ask ourselves, “What can we learn from this situation? How can we adapt our behaviors to survive and thrive? What learnings can we take from this experience to be better people when we come out of all of this?”

Your own personal or business experience during these times will, no doubt, be unique to you and the ways in which you deal with it will be just as unique. How you choose to react to the challenges that are put in your path and the decisions that you make to help you endure will require a flavor of resilience that is as unique as your challenge.

9. “Return with honor.” Ralph and his comrades held onto this credo which served as their foundation during their time in captivity. Their ultimate desire was to be able to hold their heads high when that day finally came that they were repatriated, knowing that they had done all they could do to resist the enemy and to deny them with the ability to gain military intelligence or fodder for their propaganda efforts. “There was a lot of motivation for us younger POWs to not let down the older guys. To not let down our families. Our country,” Ralph shared. 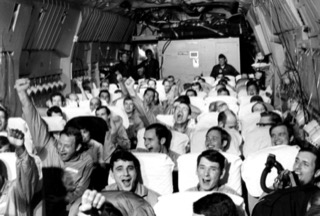 Despite the challenges that you, your loved ones, and your businesses may be facing, the way in which you behave and the decisions you make today will be with you for the rest of your lives. Knowing that one day we will all look back at this time and reflect, I encourage you to ask yourself – How do you want to be remembered?

No matter, what your unique situation right now as an individual or a business, you have a choice to make. Will you go into your shell and wait things out while falling into the trap of hopelessness or will you make a declaration that you will return with honor as well? I encourage you to find ways to be proactive in moving yourself and your business forward quickly so that you, too, can return with honor when that day comes for you to open up shop again.

This article originally appeared on Forbes.com.