I stopped dieting for weight loss purposes 15 years ago. My brain finally understood what I knew all along; diets deplete willpower, make you fat, unhealthy and unhappy.

Instead of dieting, I’ve been doing the obvious — eat what I want, when I want it, in a balanced way. The results are as expected; better health and consistent weight for over a decade. No restrictions, no stress.

There are a lot of things in life that work the same way. Intellectually we understand a wide range of facts and theories; however, it can take decades before we can truly put that knowledge into practice. Why is that? I think there are many reasons. But one powerful reason is our ability to rationalize everything. We convince ourselves that it can’t be that easy.

Business practices are the same; there is a ton of common sense and wisdom around us but we choose to make things complicated, potentially out of fear. After all, it can’t be that easy, right?

Here’s an example of a business practice that makes total sense but that is hard to find in most working environments. For a bit of context, our team is small and distributed. We have team members in 6 different countries and time zones.

Trying to control people and their work.

One of the wonderful things about building a remote company is that you have to learn to reject the urge to control and micro manage people. Instead, you have to build real trust — trust that can be tested every day and not break.

Every team member at our company has the freedom to work from any place in the world; they can work when they feel most productive and take time off when they need it. We don’t count hours, we focus on results. That all sounds sweet and cuddly but it works. There is no fluff here. People do better work faster, feel productive and happier. Period.

You don’t need to hear that from Jason Fried to know it is true. You can intellectually understand it and know that it makes sense. In practice, it looks a bit like this: a team member called Juan types in your internal chat:

“Guys, I’m going to take a nap and come back later, I didn’t sleep well and have a headache..”

In a typical business setting, there would be some sort of freak out, some peers would get offended by Juan somehow being lazy and not pushing through the day, others will keep tabs for the next 1–1 session with Juan, and in other companies, Juan would get fired immediately.

It takes a lot of discipline to build a company where Juan can feel confident about the fact that he is doing the right thing for him and the company. It takes discipline but it is not complicated.

Why do we want Juan to be tired at work? Make a bunch of mistakes and have a bad day? Wouldn’t be easier for Juan to go, take that nap and come back when he is ready? This is not new, you know this is the right thing to do. However, managers keep overworking people, making them feel insecure and trying to get the best out them while using fear tactics. This is bananas.

It is not only about the managers. It also takes a lot of discipline from other team members to make trust their default thinking. They have to be convinced that Juan is doing the best for everybody and not playing Grand Theft Auto Five while drinking Bloody Marys at home. Most importantly the team needs to feel confident that Juan will come back at some point, do a superb job and continue doing his thing.

Some people work well in the evenings, others early morning. Some people need quiet environments, others need noisy places, some people have to go to the doctor or pick up their parents at the airport in the middle of the week, some suffer from insomnia, some people get their periods and feel crappy. Those things are part of life and making talented people restrict themselves to justify outdated practices is the best way to lose them.

“People are responsible adults at home. Why do we suddenly transform them into adolescents with no freedom when they reach the workplace?” — Ricardo Semler

You may be thinking: …But Sofia, what are you talking about? Where is the hustle? Have you watched the latest Gary V?

My answer is that hustle comes in different shapes and forms. Productivity is not about sweating your butt off. Hustle and speed come from an unbreakable commitment to do our best work and help the people who help us make that work happen.

Productivity for me is to be part of a team I don’t have to control. A team that does more in less time because they are not exhausted. A team that gets involved beyond their job description because they feel good about helping others. No drama, no waste of time, just people learning, contributing and being happy at the end of their working day, whatever that looks like for them.

My guess is that a lot of outdated practices come from people in positions of power who are not self-aware enough to understand how their own insecurities and psychological baggage affect their teams. It is easier to rationalize the need for control than to do the simple thing. Let your team do what they want to do and be who they want to be without micromanaging people.

If your team is driven by learning, by freedom, and by achieving a common goal, all you need to do is to provide the best environment for those things to happen. The rest is noise.

You may say, well… that all sounds great and fun, but you are a small team, you can’t do that in a larger organization and you probably drank too much oolong tea.

Maybe, but here is what I know.

If trust didn’t scale we all would be dead by now. We need to trust each other to function as a society. In business, you build trust by doing small things well, for example:

When Aurora says she is leaving early because she is getting her driving license, you as a leader, don’t freak out.

When Rudolf proposes an idea, you make sure he knows his idea will be implemented or why it will not be implemented. We all need to know WHY.

When a bunch of people are in a meeting, but Carlos has not had a chance to speak, you ask Carlos what he thinks about the discussion. Some people need to know that their ideas matter. Because they do.

When Jakobo messes something up or delivers something late, you don’t assume that he did that intentionally, you assume he was doing his best based on what he knew at the time. You try to understand what happened. No blame. Accountability is an agreement, not an imposition.

If Bedelia is looking upset, you overcome your social awkwardness and ask if she is OK. If she is not OK, you let her know she can take the day off.

When you say you are going to do something, you do it. If you tried hard but couldn’t deliver, then say why. But make sure you did your very best.

Then you say… But Sofia, who are these people? You don’t know what you are talking about, not everybody is like that, I know some people that are nasty and they don’t care at all.

Good organizations know how to set boundaries without making people feel caged. Trust is built every day, with small but frequent reactions and interaction.

I’m not saying that all of those small interactions have to feel like marshmallows. Heated conversations are needed. Healthy disagreements are necessary. The trust you want to build is the kind of that lets you communicate that you are annoyed and disappointed with something or somebody without feeling the fear of destroying your relationship with that person.

“Compassionate people ask for what they need. They say no when they need to, and when they say yes, they mean it. They’re compassionate because their boundaries keep them out of resentment.” ― Brené Brown

The same way it took me years of frustration and weight fluctuation to finally decide to stop dieting. It took me many burnouts and failures as a leader to finally understand that the best way to manage people is not to manage them at all.

Your Guide to Employee Engagement 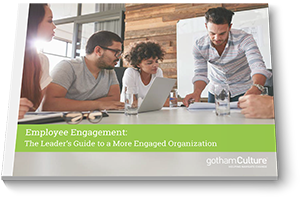 Learn how to engage, retain and develop your talent to drive performance.

Sign up to our newsletter and receive your free guide to a more engaged organization.

Latest posts by Startups.co (see all)