The “war for talent” has been raging for years. Companies are doing whatever they can to attract and retain the highest caliber workforce possible in our fast-moving and hypercompetitive business environment.

But some leaders in the talent space, like Mike Ettling, president of SAP SuccessFactors, don’t buy into the “war for talent” narrative, suggesting that we have created this pervasive belief through the influence of our own biases.

“This entire premise is based on the belief that there is a talent crisis,” shares Ettling. “It’s my point of view that the talent shortage is nothing but a myth. The only reason people may feel a shortage exists is because they are not fishing in a big enough pond. It is the result of unconscious bias in the workplace.” 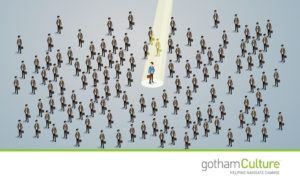 Unconscious bias impacts our perceptions and decision-making processes without us even being aware. As our brains process information and work to help us make quick decisions, we categorize things. This isn’t necessarily a bad thing, but it can drive less than optimal outcomes for us in life and work if we aren’t aware it’s happening.

Ettling shares that one such bias is the belief that leaders must come from G20 countries. A South African who spent a significant amount of his career both in the UK and the United States, Ettling believes assumptions like these can be very limiting.

“By the time my diversity leaders tell me we have a diversity issue, we’re too late,” he says. “We as business leaders must find a way to identify the origins of unconscious bias, and I think we can use technology to help make that happen.”

Take, for example, the common practice of writing job descriptions. Those drafting the descriptions unwittingly tend to use words and terms that gear descriptions toward the genders historically associated with those jobs. Females in the case of nursing, or males for welding job.

Researchers out of Lawrence University have long studied how implicit biases may exclude qualified people from certain roles, according to a recent HBR article. One experiment examined the relationship between participant’s implicit gender stereotypes and their hiring decisions. “Those holding stronger implicit biases were less likely to select a qualified woman who exhibited stereotypically ‘masculine’ personality qualities, such as ambition or independence, for a job requiring stereotypically ‘feminine’ qualities, such as interpersonal skills. Yet they would select a qualified man exhibiting these same qualities.”

These biases play out in many subtle ways in the world of work. Say, for instance, you use a tech platform to help facilitate compensation decisions. If the platform displays images of your employees beside their qualifications, the possibility exists that unconscious bias may creep into your decision-making process.

Winning Your Own Talent War

Here are a few tips for you to consider to help mitigate the negative effects of unconscious bias in your hiring practices. These can certainly be amplified with the use of technology, but can also be deployed without it.

As SAP SuccessFactors and other developers in the HR tech space better understand unconscious bias, they will work to redesign their solutions to help combat it. In so doing, Ettling feels that technology can level the playing field and help business leaders realize the abundance of phenomenal talent available in the world. But only if we’re able to move past our biases and fish a bigger pond.

Chris Cancialosi, Ph.D., is a Partner and Founder at gothamCulture. This article originally appeared on Forbes.