Last month I attended Denison Consulting’s Annual Best Practices Forum, an event that has been a grounding point for me to interact with other thought leaders in the space and to share and learn with other internal and external practitioners who are doing the real work on the ground within organizations every day.

Dan Denison, a well-respected researcher in the space of organizational culture, gave a fascinating presentation during the conference, sharing some of the biggest culture stories from 2015 and some key lessons that we can take into this year. This article is intended to summarize some of the key observations of Dan’s presentation and add to the discussion from my own perspective.

Last September, the Environmental Protection Agency found that many Volkswagen cars sold globally since 2008 included a “defeat device” in their diesel engines that detects when they were being tested. This allowed VW’s diesel engines to cheat their emissions tests while emitting nitrogen oxide pollutants up to 40 times above what is allowed in the U.S. on the road.

In the ten years prior to this situation, VW became the largest car manufacturer in the world. Their mantra: Be aggressive at all times. Recently, the company has been pushing to sell diesel cars in the U.S. with a marketing campaign that touts its vehicles’ low emissions.

When the scandal broke, then CEO Martin Winterkorn denied any knowledge, but ultimately resigned a week later amid the controversy. But, Mattias Mueller, who took over as CEO, has only continued to raise more questions about the company after an interview with NPR where he stated, “We didn’t lie” to U.S. regulators.

Michael Horn, CEO of Volkswagen America, has at least taken a step to come clean. While he stated that the problem was caused by “a couple of software engineers,” he also stated that VW “has to bloody learn and use this opportunity in order to get their act together.”

What lessons can we learn from Volkswagen’s recent scandal?

It’s clear to see from this case that the underlying beliefs and ways of working in an organizational system (the culture) have a profound effect on the types of behavior that are accepted and promoted. The amount of sheer effort it must have taken the team at Volkswagen to continually hide the truth from their Board of Directors must have been staggering. And culture was the driving force that enabled it to happen in the first place. 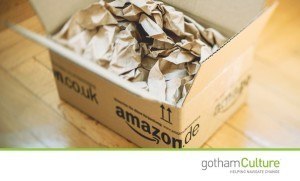 On August 15th, Jodi Kantor and David Streitfeld published an article in the New York Times called Inside Amazon: Wrestling Big Ideas in a Bruising Workplace. The article cast a harsh, ultracompetitive light on Amazon’s culture, and sparked a firestorm of controversy in the media. But despite all of the commentary that followed, the article didn’t provide any real analysis or data.

It seems quite common for the media to judge company cultures as “good” or “bad” as is the case with the Amazon story. But we prefer to refrain from such judgments and attempt to understand how the existing culture may be helping (or hindering) execution of the strategy in a sustainable way.

This story caught the attention of the masses in 2015 and highlights the impact that culture can have on the people who are attracted to, stay with, or leave the organization. In this example, the truth seems to be the subject of some debate, but the fact remains—an organization’s culture sends clear messages to employees about what is expected and what success looks like.

Tesco PLC is a global grocery and general merchandise retailer based out of the UK. It’s the third largest retailer in the world by profits and the second largest by revenues.

While Tesco has experienced spectacular growth over last 20-30 years, they’ve experienced £6bn in losses and a sharp decline in stock prices following a recent accounting scandal. In September of 2014, it was brought to light that Tesco had over-stated profits by £263M. And in the last five years alone, the company has gone through 3 CEO’s and experienced an exodus of other key executives.

The Tesco story showcased a tale of how an organization’s culture can, at one time, drive its wild success, but when taken to an extreme, can often be its downfall. The value of being good financial stewards, in and of itself is not a bad thing. But when taken to the extreme spelled trouble for this household name. This highlights for me the fundamental need for balance of the natural tensions that are required for sustainable success.

Jack Ma founded Alibaba in 1999 as a B2B online marketplace to allow companies to source goods produced in China. In 2003, they expanded from B2B to B2C and even C2C with the creation of Taobao, using a similar model as ebay.com.

Alibaba Group Holding Limited is often described as combination of marketplace, search engine and bank. They are the world’s largest online sales company, accounting for 60% of all packages shipped in China, and in 2014 they completed largest IPO in history. But with their rapid global expansion they have faced several challenges, from trying to break into the mainstream American and European markets, to becoming more of a player in media market.

What lessons can we learn from Alibaba?

Not all of the biggest culture stories of 2015 were cautionary tales. Alibaba’s rise to a leader in the space is not by chance. Their success was the result of a long-term view and intentional actions that support a forward-looking strategy.

The organization’s ability to look years into the future and plan for major change and disruption has positioned it for growth and success. This long-term thinking is a fundamental aspect of their organizational culture. Balancing the long-term view in conjunction with the day-to-day execution is a fantastic challenge for leaders and businesses to manage. That’s what makes success such an elusive thing for many.

What Will Be Your Story?

These four examples showcase the tangible impact that an organization’s culture can have on performance. The systems that people operate in; the underlying beliefs and the behaviors all combine in a culture that drives performance. Leaders who understand this and who are able to take a long-term perspective are those that are able to shape aspects of their culture to progress.

Each of these examples highlights the dynamic tensions that exist in organizational life and can serve as examples for others to consider as they grow their own organizations.

Whether it be the Tesco example, which highlights the tension between stability and flexibility, or Alibaba’s example of balancing both the long-term view with the short-term ability to execute, these tensions exist in everything we do. How we as leaders manage these tensions is strongly guided by the underlying beliefs and assumptions we hold to be true about business should be done.

This article originally appeared on Forbes.